Write the main reactions of chain transfer and chain break of acrylonitrile polymerization in the presence of butyl lithium. 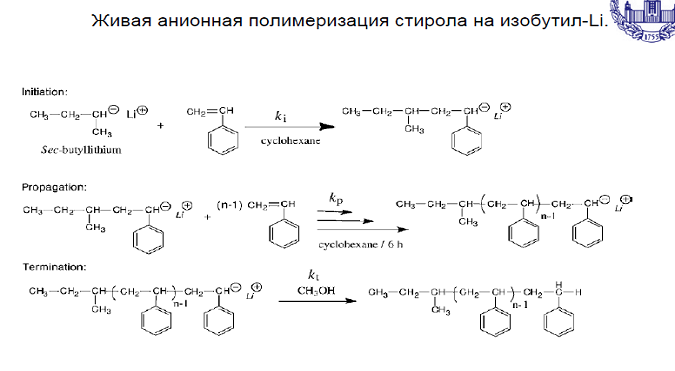 Find the major difference between reactions of photochemical and chemical initiation of radical polymerization. Write the appropriate equations.

The basis of photochemistry is that photon absorption generates an excited state in molecules, which increases the likelihood of molecular participation in chemical reactions. In order to access the required state of molecular excitation, the molecule of interest (in this case, benzoyl peroxide) needs to have absorbed light at a specific wavelength. Benzoyl peroxide absorbs only in the UV portion of the spectrum; O-O homolysis can be initiated by irradiation with ~250 nm light. This wavelength is too short for the human eye to see. To illustrate the importance of photon absorption for photochemistry, we will first examine the polymerization of styrene initiated by benzoyl peroxide directly under visible light irradiation. The absorption spectrum of benzoyl peroxide does not have significant absorption in the visible region (benzoyl peroxide is colorless), and photoinduced polymerization with visible light is not facile.

In order to overcome the poor absorptivity of many organic molecules towards visible light, photosensitizers are utilized. Photosensitizers are molecules that participate in photon absorption and then transfer energy to a different molecule to promote photochemical reactions. Benzophenone is a common photosensitizer; the photochemistry of this molecule is described in Figure 2. Photon absorption in the ground state generates a singlet excited state. Intersystem crossing affords the triplet ground state, which compared to the singlet excited state, is long lived. Energy transfer from the triplet excited state to benzoyl peroxide can lead to O-O bond cleavage and radical-chain initiation. The photosenstitizer is useful because unlike benzoyl peroxide, it has substantial absorption in the visible spectrum.

In competition with energy transfer to substrate, the triplet excited state can undergo relaxation to regenerate the singlet ground state; if this process is fast relative to energy transfer, then sensitization is not efficient.

Through the experiments that are outlined in this video, we will confront the topics of photochemistry, triplet sensitizers, and polymerization chemistry. 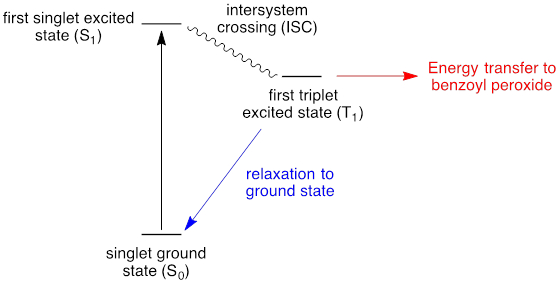 Radical initiators are important tools for the production of polymer materials. Photo-initiated polymerization reactions find applications in a variety of areas.