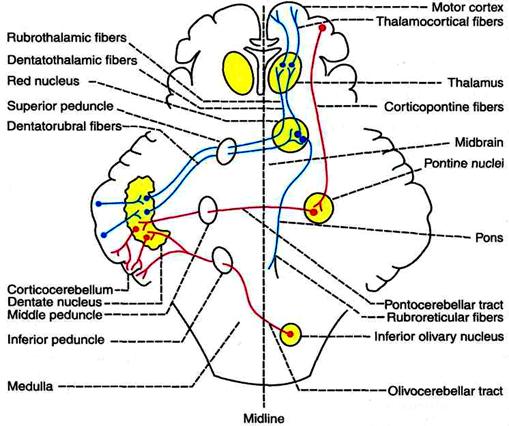 Corticocerebellum is concerned with the integration and regulation of well coordinated muscular activities. The lesion in corticocerebellum leads to disturbances in movements.

MECHANISM OF ACTION OF CORTICOCEREBELLUM

All the voluntary muscular activities are initiated by motor areas of cerebral cortex. Simultaneously, corticocerebellum receives impulses from motor cortex as well as feedback signals from the muscles as soon as the muscular activity starts.

Corticocerebellum in turn sends impulses to cerebral cortex to discharge appropriate signals to the muscles so that, any extra or exaggeration of muscular activity is prevented and the movements become smooth and accurate. This action of corticocerebellum is called damping action.

The rapid alternate movements, which take place in different parts of the body while doing any skilled or trained work like typing, cycling, dancing, etc. are called ballistic movements. Corticocerebellum plays an important role in preplanning these movements during learning process.

Timing and Programming the Movements

While using a typewriter or while doing any other fast skilled work, a chain of movements occur rapidly in a sequential manner. During the learning processes of these skilled works, corticocerebellum plays an important role. The corticocerebellum plans the various sequential movements. It also plans the time duration of each movement and the time interval between movements. All the information from corticocerebellum are communicated to sensory motor area of cerebral cortex and stored in the form of memory. So, after the learning process is over, these activities are executed easily and smoothly in sequential manner.

Once the skilled works are learnt, the sequential movements are executed without any interruption. Cerebellum lets the cerebral cortex to discharge the signals, which are already programmed and stored at sensory motor cortex, and, does not interfere much. However, if there is any disturbance or interference, the corticocerebellum immediately influences the cortex and corrects the movements. This action of corticocerebellum is known as servomechanism.

Basal ganglia are the scattered masses of gray matter submerged in subcortical substance of cerebral hemisphere. Basal ganglia form the part of extrapyramidal system, which is concerned with integration, and the regulation of motor activities.

It is a mass of gray matter situated at the base of cerebral hemispheres in close relation to the thalamus. The internal capsule incompletely divides the corpus striatum into two parts.

This is an elongated arched gray mass, lying medial to internal capsule. Throughout its length, the caudate nucleus is related to lateral ventricle. Caudate nucleus has a head portion and a tail portion. The head is bulged into lateral ventricle and situated rostral to thalamus. The tail is long and arched. It extends along the dorsolateral surface of thalamus and ends in amygdaloid nucleus. 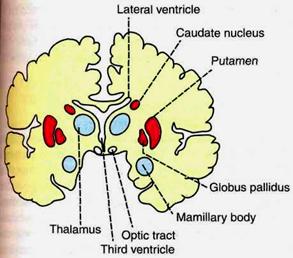 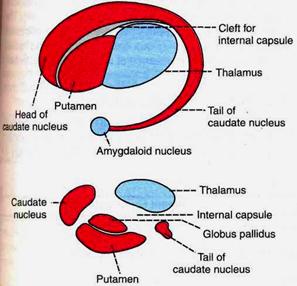 a. The outer putamen and

b. The inner globus pallidus

This is situated below red nucleus. It is made up of small unpigmented and large pigmented cells. The pigments have high of quantity of iron.

This is situated lateral to red nucleus and dorsal to substantia nigra.

The different components of corpus striatum in each side are connected to those of the opposite side by commissural fibers.

The basal ganglia form the part of extrapyramidal system, which is concerned with motor activities. The various functions of basal ganglia are: 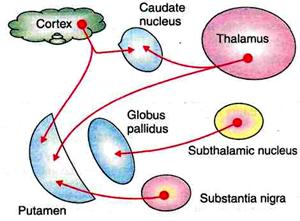 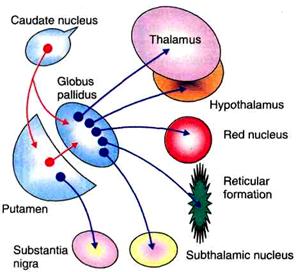 Fibers between cerebral cortex and caudate nucleus are concerned with regulation of conscious movements known as the cognitive control of activity. The cortical fibers reaching putamen are directly concerned with control of subconscious execution of some movements during performance of trained motor activities, i.e. skilled activities.

Gamma motor neurons of spinal cord are responsible for maintaining the tone of muscles, which is important for posture. The tone of the muscle also depends on actions of muscle spindle. Gamma motor neurons, muscle spindle and muscle tone are all controlled by basal ganglia especially substantia nigra. In the lesion of basal ganglia, tone increases leading to rigidity.

Some of the reflex muscular activities, particularly visual and labyrinthine reflexes are important in the maintenance of posture. Coordination and integration of impulses for these activities depend upon basal ganglia.

During lesion of basal ganglia, postural movements, especially visual and labyrinthine reflexes become abnormal. These abnormal movements are associated with rigidity. Rigidity is because of the loss of inhibitory influence from the cerebral cortex on spinal cord via basal gangliа

Globus pallidus and red nucleus are involved in arousal mechanism because of their connections with reticular formation. Extensive lesion in globus pallidus causes drowsiness, leading to sleep.

ROLE OF NEUROTRANSMITTERS IN THE FUNCTIONS OF BASAL GANGLIA

Dopamine: It is released by dopaminergic fibers from substantia nigra to corpus striatum (putamen and caudate nucleus - nigra strial fibers). The deficiency of dopamine leads to Parkinsonism.

Gamma aminobutyric acid (GABA): It is secreted by intrinsic fibers of corpus striatum and substantia nigra.

Acetylcholine: It is released by fibers from cerebral cortex to caudate nucleus and putamen.

Substance P and enkephalins: These are released by fibers from globus pallidus reaching substantia nigra.

Noradrenaline: This is secreted by the fibers between basal ganglia and reticular formation.