Components and connections of functional divisions of cerebellum 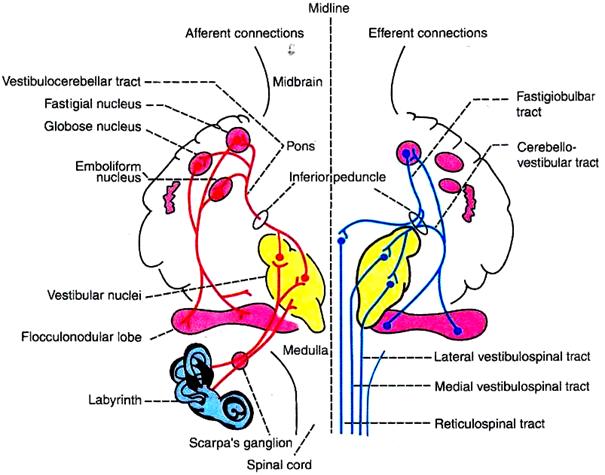 Fibers of this tract arise from the flocculonodular lobe, pass through the inferior cerebellar peduncle of the same side and terminate on the vestibular nuclei in brainstem. The fibers from vestibular nuclei form medial and vestibulospinal tracts, which terminate on the medial group of alpha motor neuron in the spinal cord. This pathway forms the medial system of motor pathway (extrapyramidal system).

This tract arises from Clarke's column of cells in the dorsal gray horn of spinal cord. It is uncrossed tract, and reaches the spinocerebellum through the inferior peduncle of same side. This tract conveys the proprioceptive information from the limbs of same side regarding the position and movements.

The fibers of this tract arise from the marginal cells in the dorsal gray horn of spinal cord. After taking the origin, the fibers cross the midline, ascend in the opposite side and reach the spinocerebellum through superior cerebellar peduncle. This tract conveys he information about the position and movements of opposite limbs to spinocerebellum. 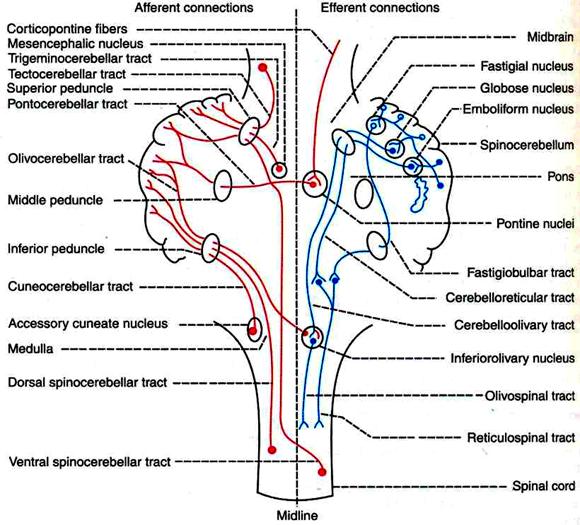 This tract is formed by the climbing fibers arising from the inferior olivary nucleus in medulla. After taking origin, these fibers cross the midline and reach the spinocerebellum through the inferior cerebellar peduncle of the opposite side. This tract also gives collaterals to the cerebellar nuclei particularly, the globosus nucleus and emboliform nucleus. The inferior olivary nucleus receives afferent fibers from three sources.

1. The brainstem nuclei of the same side

2. The spinal cord through spino-olivary tract of same side

3. Cerebral cortex of opposite side

The olivocerebellar tract conveys proprioceptive impulses from the body and output signals from cerebral cortex to spinocerebellum.

Spinocerebellum also receives impulses from optic and auditory pathway and helps in adjustment of posture and equilibrium in response to visual and auditory impulses.