Cerebellum and its connections

Signs of a cerebellum lesion

Static ataxy – it is infringement of statics in rest (shaking).

Dynamic ataxy – it is locomotion coordination disorder at performance of targeted movements. A tremor of extremities – so-called intentional tremor – is observed. Walking is shaky, “drunk”.

Cause of cerebellar ataxy is the disturbance of сonjugative work of muscles – agonists and antagonists, disproportion of locomotion – dysmetria. Rapid change of one locomotion by others, inverse ones – adiadohokinesis (pronation and supination) is impeded.

Asynergia – it is disturbance of mutual conjugated movements.

Atony – it is loss of muscle tone (anterior part of cerebellar posterior lobe is responsible).

Astasia – it show up in ability of muscles to realize oscillating motions (tremor, shaking) and in disabilities to conjoint tetanic contraction.

Tremor – it is oscillating motions in various body segments.

The excision of cerebellum does not cause disappearance of reflectory responses; tonic reflexes of brainstem are non-changed. 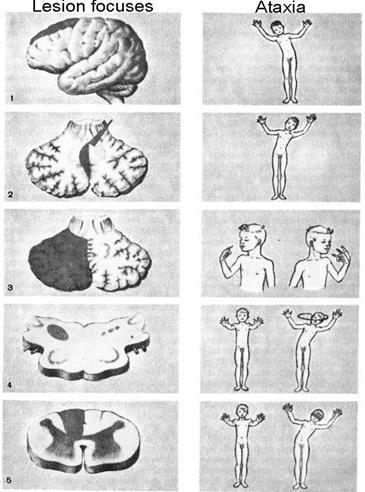 Assays (probes) for an examination of cerebellar functions

Examination of coordination and dynamic ataxy

Assay of Romberg – it is examination of equilibrium in rest. Ataxias arise at a lesion of spinal cord posterior funicles and vestibular apparatus.

In case of a cerebellar hemispheres lesion the patient is inclined to the side of the focus of a lesion.

In case of a lesion of big hemispheres cortex patient falls to the side opposite to the focus.

Phalanx walking – it is step-by-step movements sideways. In case of a lesion leg are excessively extended and are thrown out forward.

Test for an assessment of functions of a cerebellum

Examination of coordination and dynamic ataxy

Diadochokinesia test – synchronism and uniformity of movements are detected. On the side of a cerebellum lesion the lag of extremities is determined.

Babynsky test. In reclining position with crossed arms it is necessary to get up. At a cerebellum lesion leg rise, and the body is remained to lie.

Оzhehovsky test. Support by palms of stretched arms should be done. At sudden disappearance of support the examinated person in norm is inclined back, the patient falls forward.

Stuart-Holms test. Forearm and hand are in position of pronation, hand is clenched in fist. The doctor tries to extend patient's forearm. Healthy person's muscles-antagonists contract quickly and stroke is prevented.

In case of cerebellum lesion

Speech is slowed, explosed (loss of smoothness), scanding (accents are not on necessary syllable) (dysarthria).

Functions: it provides involvement of all motor systems of brain, perfects movements making them economic and automatic.