What new emissions reduction targets have countries agreed to implement?

* the links you might find useful are in Appendix 1

Task 1. Get ready to answer the following questions.

What is Global Warming and Climate Change?

What are the main indicators of Climate Change?

What is the Greenhouse Effect?

The Greenhouse effect is natural. What do we have to do with it?

Name the World’s Largest Emitters of Greenhouse Gases Per Capita?

What is the role of developed countries in climate change?

Why are developing countries affected most?

Task 2. Look at the list of different impacts of Global Warming and make a 7 minute presentation featuring one of them.

- Extreme weather events on the increase

- Increase in Pests and Disease

Task 3.Find as much information as possible about the following and get ready to discuss the questions below:

- What are its mission and priorities?

- when did UNFCCC enter into force?

- Which countries signed the at the UNFCCC Rio Earth Summit in 1992 and how many have joined them by now?

-  What did UNFCCC commit the global community to do?

- What is Kyoto Protocol?

- What did it commit its parties to do?

- Position of the USA. Why was Washington reluctant to sign the Protocol?

- Position of Russia. Why have not Moscow taken on new targets in the second commitment period?

- Why did Kyoto protocol fail to work properly?

Task 1. Read the text and answer the questions given after it:

According to the latest findings of the Intergovernmental Panel on Climate Change (IPCC), without urgent action, climate change will bring severe, pervasive and irreversible impacts on all the world's people and ecosystems. Limiting dangerous rises in global average temperature to below 2°C compared with pre-industrial levels (the below 2°C objective[1]) will require substantial and sustained reductions in greenhouse gas emissions by all countries.

This global transition to low emissions can be achieved without compromising growth and jobs, and can provide significant opportunities to revitalise economies globally. Action to tackle climate change also brings significant benefits in terms of public well-being. Delaying this transition will, however, raise overall costs and narrow the options for effectively reducing emissions and preparing for the impacts of climate change. All countries need to act urgently and collectively.

The United Nations Framework Convention on Climate Change (UNFCCC), formed in 1992 by 196 parties, set the ultimate objective to “stabilize greenhouse gas concentrations in the atmosphere at a level that would prevent dangerous anthropogenic interference with the climate system.”

The world has come a long way since the inception of the UNFCCC, sometimes in fits and starts. In 2009, the Copenhagen climate change conference produced the Copenhagen Accord. This Accord was expanded and formally adopted in 2010 as the Cancun Agreements where dozens of countries—including the United States, China, European Union, and India—committed to reducing their emissions by 2020. Countries also agreed to a new set of mechanisms to help developing countries reduce emissions and adapt to climate change, as well as a new system to track countries’ progress on their commitments. In 2011, climate negotiations in Durban, South Africa set the end of 2015 as the deadline for a new international agreement “applicable to all parties.” The Paris agreement has fulfilled this mandate to establish a post-2020 agreement.

Culminating a four-year negotiating round, the new treaty ends the strict differentiation between developed and develop­ing countries that characterized earlier efforts, replacing it with a common framework that commits all countries to put forward their best efforts and to strengthen them in the years ahead. This includes, for the first time, requirements that all parties report regularly on their emissions and implementa­tion efforts, and undergo international review.

The agreement and a companion decision by parties were the key outcomes of the conference, known as the 21st ses­sion of the UNFCCC Conference of the Parties, or COP 21.

What new emissions reduction targets have countries agreed to implement?

Countries responsible for more than 80 percent of global greenhouse gas emissions made specific commitments to reduce their emissions by 2020 as a part of the Copenhagen and Cancun agreements. The EU accounts for 9% of global emissions and this proportion is falling. In November 2014 the world's two largest emitters - China (25% of global emissions) and the US (11%) – followed the EU by announcing their indicative post 2020 targets. The Paris agreement includes commitments that go beyond 2020, reflecting a greater level of ambition than in the previous commitments. Countries’ emissions reduction commitments reflect their different levels of development and capabilities. For example, the United States and European Union have committed to economy-wide emissions reduction targets (e.g., cuts below 2005 levels), whereas developing countries and emerging economies have committed to targets that reflect their level of development and historic contribution to climate change (e.g., greenhouse gas intensity targets). The 187 countries responsible for more than 97 percent of the world’s climate pollution have announced specific reduction plans also known as Nationally Determined Contributions (NDCs) (see Figure 1). As part of the Paris Agreement, countries will formally enshrine their climate action plans in the coming months once they formally join the agreement. 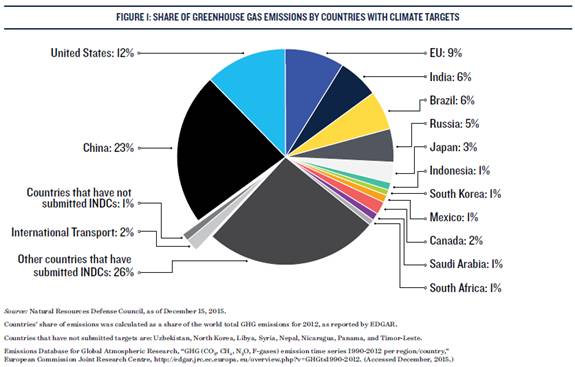