Product advertising is an important part of the marketing mix. Its aim is to increase sales by making a product or service known to a wider audience, and by emphasising its positive qualities. A company can advertise in a variety of ways, depending on how much it wishes to spend and the size and type of audience it wishes to target. The different media for advertising include television, radio, newspapers, magazines, the Internet and direct mail. The design and organisation of advertising campaigns is usually the job of an advertising agency.

Corporate advertising is not directly concerned with increasing sales of a particular product or service, but more with the brand Image, or picture, a company wants to present to the public. Public relations (PR) experts specialise in organising activities and events which generate positive publicity for companies. Unusual advertising campaigns sometimes get extra publicity for the company by way of media reports about the campaign. 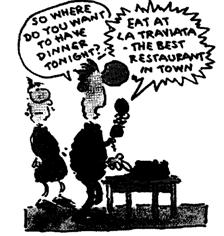 · Discuss in groups, what other methods of advertising do you know? 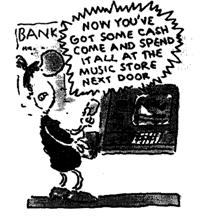 As consumers get more used to advertising, companies have to come up with better ways of ensuring that people pay attention to their ads. In pairs, say what you think of these recent experiments in advertising. Can you think of any new and innovative ways to advertise? 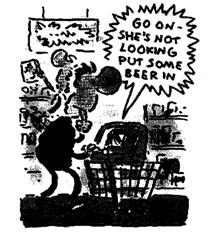 1. Where can we see advertisements?

2. What are the functions of advertising?

3. What is the aim of an advertisement?

4. Are advertisements useful to the community? Why?

5. Is advertising necessary? Can products be marketed without advertising?

Now read the articles and find answers to the questions above.

ADVERTISEMENT AS A SERVICE

Although the average citizen is usually annoyed by all the advertisements printed in newspapers and magazines and the commercials broadcast on TV, the impact of the whole advertising industry on a single person is immense and plays a very important role in our lives. Advertising absorbs vast sums of money but it is useful to the community.

What are the functions of advertisements? The first one to mention is to inform. A lot of the information people have about household devices, cars, building materials, electronic equipment, cosmetics, detergents and food is largely derived from the advertisements they read. Advertisements introduce them to new products or remind them of the existing ones.

The second function is to sell. The products are shown from the best point of view and the potential buyer, on having entered the store, unconsciously chooses the advertised products. One buys this washing powder or this chewing gum, because the colourful TV commercials convince him of the best qualities of the product. Even cigarettes or sweets or alcohol are associated with the good values of human life such as joy, freedom, love and happiness, and just those associations make a person choose the advertised products.

The aim of a good advertisement is to create a consumer demand to buy the advertised product or service. Children are good example as they usually want the particular kind of chocolate or toy or chewing-gum.

Being naive they cannot evaluate objectively what is truthful and what is exaggerated and select the really good products unless they buy the goods and check for themselves.

Thirdly, since the majority of advertisements are printed in our press we pay less for newspapers and magazines, also TV in most countries in cheap.

The public advertising seen on street hoardings, railway stations and buildings makes people’s life more joyful. Moreover, all those small ads in the press concerning “employment”, “education” and “For sale and wanted” columns, help ordinary people to find a better job or a better employee, to sell or to buy their second-hand things and find services, or learn about educational facilities, social events such as, concerts, theatre plays, football matches, and to announce births, marriages and deaths. Thus despite our dissatisfaction when being bombarded by all the advertisers’ information we must admit that they do perform a useful service to society, and advertisements are an essential part of our everyday life.

People starting a small business often assume they must advertise to attract customers. This always made good sense to me until I read and thought about some eye-opening ideas in Marketing Without Advertising, by Michael Phillips and Salli Rasberry (Nolo). Phillips and Rasberry argue convincingly that for small businesses, most money spent on conventional advertising radio and TV spots and display ads in newspapers is wasted. You're competing with thousands of other advertisers, and your message is unlikely to be noticed by enough potential customers to produce a profitable level of sales.

Here's more from Marketing Without Advertising:

The best and most economical way to attract and hold customers is through personal recommendation. A customer who is pre-screened and prepared for what you have to offer is far more likely to appreciate you and use your business than is someone responding to an ad offering a low price. The essence of marketing without advertising is to encourage personal recommendation. How do you do this? Lots of ways, all of which start with creating an atmosphere of trust. Central to doing this is to run an honest business.

Phillips and Rasberry recommend marketing strategies that don't rely on traditional advertising. For example, they discuss the importance of the physical appearance of your business (insist on scrupulous cleanliness and avoid clutter and unpleasant smells). They point out that listing your products or services where customers expect to find them such as the Yellow Pages, local business directories, trade publications and, depending on the business, the classifieds is often extremely cost-effective. Interestingly, Phillips and Rasberry distinguish between advertising and listings not on the basis of cost (although advertising does usually cost considerably more), but on whether customers are pre-screened to see your message. For example, someone who checks the Yellow Pages or a local free classified newspaper for a drain cleaning service needs that type of business. By contrast, someone who reads a display ad or hears a radio spot for the same business is unlikely to need that service immediately or to remember the ad months or years later when the need does arise.

· Can you think of some other ways of marketing a product?

· What should be taken into account when choosing the best advertising technique?

Exercise 2. Fill in the gaps in the passage below. To help you, the first letter or letters of the missing words are given, and the dashes correspond to the number of missing letters.

The dictionary defines 'advertise' as 'to make (something for sale, services offered, etc) known to the public'. Advertising can therefore be considered a form of com_ _ _ _ _ _ _ _ _ _ 1, the ultimate aim of which is to per_ _ _ _ _ 2 consumers to choose a specific product or service.

A b_ _ _ _4 can be defined as the name attached to a product or service, how that name is visually expressed through a l_ _ _5 and how that name and logo are extended throughout a company's communications.

Creating a powerful brand identity is essential to g_ _ _9 a strong competitive a_ _ _ _ _ _ _ _10. A successful brand will make customers think of your company first when they think of the particular product category to which the brand is attached. A classic example here is the 'Hoover' brand. The word 'hoover' became a synonym for 'vacuum cleaner', and many people still use the word 'hoover' even if the apparatus they use was manufactured by another company.

Exercise 3.   Put the following paragraphs in their proper order, to produce an article about The Age of Advertising.

(A) In general, housewives will not understand much about science, but they feel that scientists know best. Scientists are looked upon as magicians, who can perform tricks. For example, before colour television was introduced the white clothes were being shown in washing powder advertisements were in fact bright yellow. Yellow looks whiter than white on black and white television. Let's hope that scientists will concentrate on improving the products they help to advertise, rather than improving the advertisements.

(B) Most companies say that advertising is necessary to give the public information and create competition. But advertising, which is very expensive, does not always inform. Instead it persuades. A man is persuaded that if he buys "Koolman" after-shave lotion he will immediately become attractive to all the pretty girls. In the same way a mother is persuaded that if she doesn't give her baby "Happibaby" food the baby will suffer. Recently anew angle has been added — science. In our technological age science is fashionable and many companies try to make us buy their goods by telling us how important science is in their production.

(C)   We live in the age of advertising. In most countries the public is exposed daily to advertisements. From the minute they wake up people are influenced by publicity — in newspapers, on the train, on boards on the way to work. When they relax after work they watch television, or perhaps go to a football match where there are advertisements, or a cricket or tennis match which is organised by a large company.

(D) The housewife is perhaps the most influenced by advertising. While she is shopping she will be attracted by colourful packets, and by signs of reductions and free gifts.

· Now choose the best answer to complete each sentence. They are all about the article above.

a) very much influenced

b) not influenced very much

c) influenced less than other people

b) helps them to be competitive.

c) allows them to give prizes.

a) she won't suffer.

b) her baby will be less healthy.

c) her baby will be more healthy.

a) a short time ago.

a) can perform miracles.