Nowadays term “analizator” has been changed in the term “sensor system”. Sensor system is an integrity of peripheral (receptive) and central structures of different levels the management of which is realized by means of direct and indirect connections.

1. According to information character coming into CNS from peripheral structures:

– interoreceptors do not possess because these receptors must not react to specific stimuli but must act to any stimuli coming inside organism.

2. Polymodality is opposite to specificity. It means possibility to act to all stimuli.

Receptors order (from maximum to minimum):

– distant exteroreceptors (they do not have).

3. Adaptation or desensitization - when a receptor is continuously stimulated with the same strength of stimulus, after sometime the receptor stops sending impulses through the afferent nerve. Depending upon this property, the receptors are divided into two types:

a) phasic receptors, which get adapted rapidly - touch and pressure receptors;

Receptor potential has such important properties.

a) It is non-propagated (local).

b) It does not work according to the law “everything or nothing”.

When the receptor potential is sufficiently strong (when the magnitude is about 10 mV), it causes development of action potential in the sensory nerve. 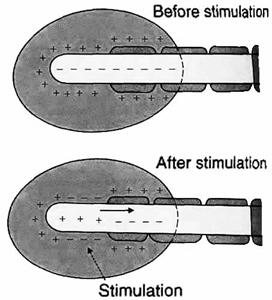 When this current reaches the first node of Ranvier within the corpuscle, it cause development of action potential in the nerve fiber.

11. Excitabilily fluctuation in one and the same receptor – it is fluctuated from high level to low excitability and finally its absence because of receptor rest.

12. Simular-grouped receptors have non-equal excitability because of different threshold. It allows to rest to one receptors.