Materials for auditory self-work. List of study practical tasks necessary to perform at the practical class.

List of study practical tasks necessary to perform at the practical class.

The students must prepare the preparation of frog’s lower extremities with skin taking off and with 3 lower vertebras saving. You should ligatured each of nervous fibers at the place of sciatic nerve exit from the spine and to separate from the spine. Students must irritate every fibre of sciatic nerve one after another with weak electrical current, while observing different irritation phenomena at it.

Put the preparation on glass plate. To irritate the preparation nerve by electrical current. Frog’s leg is bended. To put the ligature on sciatic nerve. To irritate the nerve by electrical current again. The muscle doesn’t contract. If you attach the electrodes so that the ligature is between 2 electrodes the leg will be contracted. To repeat the examination but to use cotton wool tampon washed in novocain solution despite ligature.

To prepare nervous-muscular preparation and to fix it into myograph. To irritate this preparation nerve with optimal frequency and force (voltage 1-5 V, frequency 50-100 Herz), to registrate myogram till tiredness becoming; to move electrodes to the muscle having increased the irritation force till optimum for tired muscle (10-20 V) and to continue to registrate myogram. The contraction altitude must get increased at it.

In conclusion: students must underline main synapses tiredness reasons and to mark that synapse is the most highly-tired structure in a whole central nervous system.

2. Nervous fibers 2 kinds and their peculiarities.

6. Conductance laws possibilities and prospects of application in dentistry.

12. Synaptic lack and its physiological role.

1. To assess resting membrane potential as well as action potential of nervous and muscular fibers.

2. To draw action potential and excitability changings during it.

4. To draw muscles contraction curves (dependently on irritation rate) and excitability changing during them.

6. To explain ways of excitement nervous-muscular conductance and different factors influence on these processes.

Nervous system diseases place one of the first places as for morbidity and lethality together with heart-vascular disorders and infectional pathology. Nervous regulation mechanisms dysregulation leads to functions dyscoordination and organism desadaptation. That is why nervous regulation functioning mechanisms and regularities knowledge is so essential for doctor of any speciality. Oral mucosa is often injured at dental diseases. It is expressed on its sensory function.

Knowledge about CNS functions is widely used by doctors of any profile for patients treatment, diseases prevention and diagnostics. CNS state investigation is applied in labor physiology, sport physiology, cosmic physiology and other physiology chapters.

To be able to: draw reflectory arc and designate its main elements; to explain excitement conductance regularities (receptor and generator potentials).

a) Somatic nervous system and

The idea about the fact that organism having nervous system has possibility to react to external stimuli action by type “buttom-answer” was pronounced by French phylosophist Reneh Decart (XVII-th century).

The term “reflex” was introduced by Irgi Prochazka at the end of XVIII-th century.

The theory of reflectory activity was developed by:

I.M.Sechenov (inhibiting phenomenon discovery; to his point of view, all conscious and unconscious reactions are the reflectory ones).

Reflex action – 1) is a protective phenomenon which occurs in response to a change inside or outside of the body;

2) responce resulting from passage of a nerve impulse through a reflex arc.

It is composed of 5 components i.e.:

1) Afferent neuron: from receptor to CNS.

2) Inter Neuron (interneuron) or associative neuron: which lies inside CNS.

4) Efferent Neuron: which comes from CNS upto the effector organ.

5) Efferent Organ: which may be:

1. The law of forward conduction.

10. Recruitment and after discharge.

ІV.According to receptors character, the irritation of which causes given reflex:

B. From mucous membranes:

VII.According to principle - what part takes part in reflex realizing:

Receptor is a specialized structure at the terminoma (end) of afferent neurons. It responds to minor changes around it, inside or outside the body.

4) analysis can not be realized without them.

There are several approaches to the receptors classification (and, thus, several receptors types).

I. According to the localization:

II. According to the activity character:

-end bulb of Krause for cold;

B. Distant or telereceptors - give response to stimuli arising away from the body:

a) photoreceptors (to light);

d) temperature (if the irritation source is very powerful)

3. Proprioreceptors - give response to change in the position of different parts of the body:

III. By the nature:

4. Electromagnetic receptors (which detect light on the retina of an eye)

– taste in the mouth;

– smell in the nose;

– oxygen level in the artery blood;

– osmolality of the body fluids;

IV. According to structure:

2. Complex (secondary-sensing) – they have a special receptor cell in front of nerve ending: 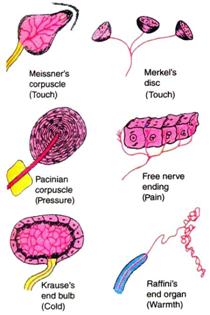