The myelin sheath is not permeable to ions. So, entry of sodium from extracellular fluid into nerve fiber occurs only in the node of Ranvier, where myelin sheath is absent. This causes depolarization in the node, and not in the internode. Thus, depolarization occurs at successive nodes. So, action potential jumps from one node to another. Hence, this is called saltatory conduction (saltare = jumping).

Nerve fibers of this type do not have myelin sheath.

а)Somatic Nerve Fibers - supply the skeletal muscles of the body.

b) Visceral or Autonomic Nerve Fibers - supply the various internal organs of the body.

3. Depending on source of origin:

a) Cranial Nerves - arising from the brain.

b) Spinal Nerves - arising from the spinal cord.

b) Sensory Nerve or Afferent Fibers - carry sensory impulses from different parts of the body to the central nervous system.

5. Depending on chemical neurotransmitter:

6. Depending on diameter and conduction

Velocity of impulse through a nerve fiber is directly proportional to thickness of fibers. Except С type of fibers, all nerve fibers are myelinated, B type is partially myelinated.

Adaptation. While stimulating a nerve fiber continuously, excitability of nerve fiber is maximum at the beginning. Later - response decreases slowly and finally nerve fiber does not show any response at all. This phenomenon is known as adaptation or accommodation.

Law “Everything or nothing”.

tells that excitation conductance through nervous fibre is possible only in a case of its non-interrupted anatomical structure and physiological features.

at irritation application on nervous fibre the excitement is diverged through it in both sides from irritation place (at tooth nerve irritation pain is stretched not only on local tissues but also irradiates in other body parts).

excitation through nervous fibers being in a composition of mixed nerves (for example, vagus) is diverged separately, i.e. it doesn’t transmit through one nervous fibre to another.

A synapse is a functional point of contact between 2 neurons, neuron and myocyte or neuron as well as neuron and secretory cell that transmits impulse from first to the second cell providing excitement (inhibiting) transmittance as well as nervous impulses transformation. The term “synapse” was introduced by English physiologist Charles Sherrington in 1897 who predisposed existence of special structural-functional formations providing contacts between neural cells.

1.According to communicational basis: 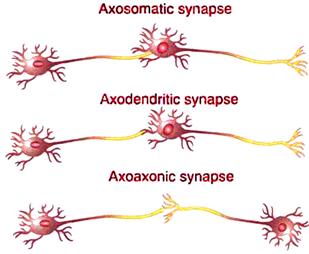 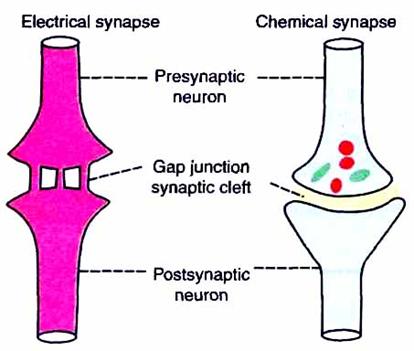 3. According to mediators – only chemical synapses.

– cysteine and so on;

4. According to ending effect:

– Stimulating – both electrical and chemical ones.

– Inhibiting- only chemical ones.

2.Synaptic cleft – is a space dividing membranes of contacting cells.

3.Post-synaptic part – is cell locus to which presynaptic ending comes. 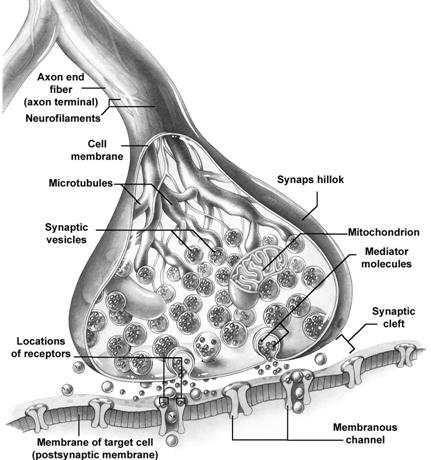 Synaptic binding is interneuronal interaction main mechanism. It provides all major expressions of nervous system activity. It is one of the most essential structural-functional brain elements.

1) mitochondria, which help in the synthesis of chemical neurotransmitter substances;

Main function of synapse is to transmit impulses, i.e. action potential from one neuron to another. However, some of synapses inhibit these impulses and so impulses are not transmitted to the postsynaptic neuron. Thus, synapses are of two types.

1. Excitatory synapses, which transmit the impulses-excitatory function and