Reflexoanalgesia – is based on reflectory action to the sick organ by peripheral biologically-active points irritation. Analgetic effects appears by means of somatic and visceral signals convergence on neurons of CNS different levels. At polymodal signals convergence somatic impulses are dominant over visceral ones. That is why impulses flow from skin-muscular nerves if it precedes to visceral one will inhibit it. Besides, the same relations are possible also inside somatic nervous system between impulsation on fast-conducting fibers which transmit dull, whining pain; impulses on fast fibers inhibits entrance on spinal neurons while this and the reactions to following stimuli on slow fibers are blocked.

Structural and functional unit of nervous system and nervous tissue is defined as neuron or nerve cell.

1. Neuron with its processes represents one morphological whole.

2. Neurons are similar genetically, they are origined from one neuroblasts.

3. Neuron is one functional integrity.

4. Excitement alongside neuron is distributed in 1 direction – from dendrites to axon.

6. Neuron participates in pathological reactions as one a whole. Destructive changings engulf a whole neuron.

Mentioned principles are in the basement of CNS structure neuronal theory. According to this theory, CNS structure and function are defined by multiplied interconnected neurons with discrete features.

Also CNS represents continuous structure like syncitium (it represents more in CNS of Non-Vetebrata (Hydras and other Coelenterata) and Amphibias.

Excitement process in neurons can be explained by electric and chemical theory.

Morphological-functional neuronal variery lies on its base. There is so-called “light axonic colliculus” or “light spot” at the place of axons divergence. This neuron locus is charged positively comparatively to neurons membranes other locusi (they have negative charge).

At excitement of synapses located on neurons dendrite and body potentials difference is increased between “axons colliculus” and rest neuron part. It gives life to the axon spike activity at definite level reaching. The more is gradient of potentials difference between neuron body and “axon colliculus”, the more frequent is initial axonic impulsation.

This theory connects neurons excitement processes with specificity of mediators, oligopeptides and ther biologically-active substances released from synapses. You will study below about excitable (noradrenaline, acetylcholine, glutamate) and inhibitory (gamma-aminooleic acid, glycine) mediators in synapses.

Also neurons excitement process depends on the specificity of postsynaptic chemical reactions which are distributed to the neurons nuclei genetic apparatus.

1. Depending on number of poles:

a) unipolar neurons – are present only in embryonic stage in human beings, from the single pole, both the processes - axon and dendrite arise;

b) pseudounipolar – they have one axon and one dendrite but both come from one neuron body pole; example – spinal ganglii;

c) bipolar neurons - have two poles, one for axon and another for dendrite; example – retina, cochlea spiral ganglium;

d) multipolar neurons - have many poles, one of which gives rise to the axon and all the other poles give rise to dendrites; biggest neurons number belong to this group.

b) sensory or afferent neurons - neurons carry the sensory impulses from periphery to the central nervous system;

3. Depending on length of axon:

a) Golgi Type I Neurons - have long axons, the cell body of these neurons is in central nervous system and their axons reach remote (far) peripheral organs;

b) Golgi Type II Neurons - have short axons, are present in cerebral cortex and spinal cord, cerebellar Purkin’e cells belong to them.

d) peptidergic – contain one of neuropeptides:

§ calcitonin-gene-related peptide and so on.

Axon is longer process of nerve cell. Axon may extend for a long distance away from nerve cell body. Length of the longest axon is about one meter.

It is located between neurons. These cells, gliocytes, are known as supporting cells. The name origin: Greek – “neuron” – “nerve” and “glia” – “glue”.

a) hemato-encephalic barrier (HEB) – it separates CNS neurons from blood and internal environment tissues and includes:

b) neuro-liquor barrier – it separates neurons from liquor;

3. metabolic and regulatory – one of the most important astrocytes functions – K+-ions and mediators optimal level supporting in neurons surrounding;

– reparative (they form scar at ending stages of inflammation in CNS while their growth).

Tanicites – cover the III-rd ventricle walls. They absorb substances from liquor and transport them through their process to vessels lumen thus providing connection between liquor in ventricles lumen and blood.

Oligodendrogliocytes– (Greek – “oligo” – “a little”, “dendron” – “tree” and “glia” – “glue” - glia with little processuses number – they surround neurons bodies, are in nervous endings compounds; they are observed both in central and peripheral nervous system.

Neurotrophins also have important functions in the adult nervous system. NGF is required for the maintenance of sympathetic ganglia, an there is evidence that neurotrophins are required for mature sensory neurons to regenerate after injury. In addition, GDNF may be needed in the adult to maintain spinal motor neurons and to sustain neurons in the brain that use the chemical dopamine as a neurotransmitter.

Experiments suggest that neurons of the CNS can regenerate if they are provided with the appropriate environment. While neutrophins promote neuron growth, some chemicals including myelin-associated inhibitory proteins, have bben shown to inhibit axon regeneration. Research in this area, with its important implications for the repair of spinal cord and brain injury, is ongoing.

Axis cylinder of nerve fiber is covered by a membrane called neurilemma. 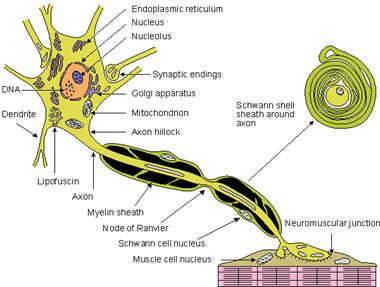 Conduction of impulse through a myelinated nerve fiber is about 150 times faster than through a non-myelinated fiber. This is because, myelin sheath forms an effective insulator and flow of current through this sheath is negligible. But action potential jumps from one node to another node of Ranvier. So, velocity of conduction is faster. This type of jumping of action potential from one node to another is called saltatory conduction.