Muscles are classifiedby three different methods based on different factors.

1.Depending upon presence or absence of striations

2.Depending upon control and

I. DEPENDING UPON STRIATIONS

Depending upon presence or absence of cross striations, the muscles are divided into two groups namely:

Under light microscope, in each muscle cell, a large number of cross striations (transverse lines) are seen at regular interval. These muscles, having the cross striations are called striated muscles.

Skeletal muscle and .cardiac muscle belong to this category.

The muscles without cross striations are called non-striated muscles. These muscles are also known as plain muscles or smooth muscles.

Depending upon control, the muscles are classified into two types namely:

The activities of these muscles cannot be controlled at will. Cardiac muscle and smooth muscle are involuntary muscles. These muscles are innervated by autonomic nerves.

III. DEPENDING UPON FUNCTION

The muscles are classified into three types depending upon function:

Light microscopic studies show that, each myofibril consists of a number of alternating light and dark bands. These bands are otherwise called the sections, segments or discs.

In an intact muscle fiber, “I” band and “A” band of adjacent myofibrils are placed side by side. This gives the appearance of characteristic cross striations in muscular fiber.

A narrow lighter area called “H” zone (H = hell = light-in German, “H” = Henson - discoverer) is seen at the middle of “A” band. “I” band is divided into two by a narrow line called “Z” line (in German Zwischenscheibe = between discs). The portion of myofibril in between two “Z” lines is called sarcomere. 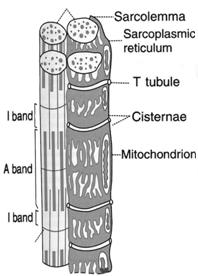 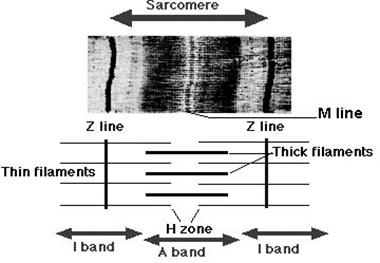 Sarcomere is structural and functional unit of the skeletal muscle. Each sarcomere extends between two “Z” lines of myofibril. Thus, each myofibril contains many sarcomeres arranged in series throughout the length of myofibril.

Each myofibril consists of alternated dark “A” band and light “I” band (Fig. 8). In the middle of “A” band, there is a light area called “H” zone. In the middle of “H” zone middle part of myosin filament lies. It is called “M” line. Similarly, “'I” band is divided into two equal portions by means of a narrow line called “Z” line. Part of myofibril between two “Z” lines is sarcomere. When muscle is in relaxed state, the average length of each sarcomere is 2 to 3 microns.

Following are the proteins present in the muscle:

Titin is a large protein and it connects “M” line and “Z” line. Each titin molecule forms a scaffolding for sarcomere and provides elasticity to the muscle. When the muscle is stretched the titin unfolds itself. However, if stretching more it is offers resistance and protects sarcomere from overstretching.

The contractile property of muscle is studied by using the frog's gastrocnemius-sciatic preparation. This is also called muscle-nerve preparation. 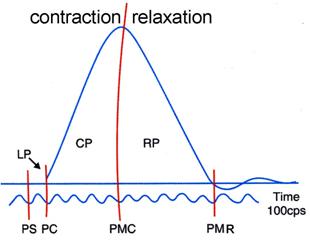 1. Point of stimulus (-PS): This denotes the time when the stimulus is applied.

2. Point of contraction (PC): This indicates the time when muscle begins to contract.

3. Point of maximum contraction (PMC): The muscle is contracting up to this point. This point also indicates the beginning of relaxation of the muscle.

4. Point of maximum relaxation (PMR): This point indicates complete relaxation of the muscle.

1.Latent period (LP) is time interval between point of stimulus and point of contraction. There is no mechanical activity in the muscle during this period.

2.Contraction period (CP) is interval between point of contraction and point of maximum contraction. The muscle contracts during this period.

Duration of different periods in a typical simple muscle curve is as follows:

Contraction time or total twich period in simple muscle varies from species to species. It is less in warm-blooded (homoiothermic) animals than in cold-blooded (poikilothermal) animals. In the same animal, it varies in different groups of muscles.

Based on contraction time, skeletal muscles are classified into two types, the red muscles and white muscles. Similarly, depending upon contraction time and myosin ATPase activity the muscle fibers are also divided into two types, type I and type II fibers. Type I fibers (slow fibers or slow twitch fibers) have small diameter. Type II fibers (fast fibers or fast twitch fibers) have large diameter. Most of skeletal muscles in human beings contain both types of fibers.

The characteristic features of red and white muscles are given in table below.

A. Effect of Strength of Stimulus

If a series of electrical stimuli are applied by increasing the strength (voltage of current) each time, force of contraction is increased. Thus, the curves of different amplitude are obtained. The strength of stimuli is of five types.

1. Subminimal or subliminal stimulus: the muscle does not show any response.

5. Supramaximal stimulus: beyond maximal strength, there is no further increase in contraction force.