The neurons of the anterior gray horn are involved in motor function and send motor nerve fibers to muscles and other effector organs. 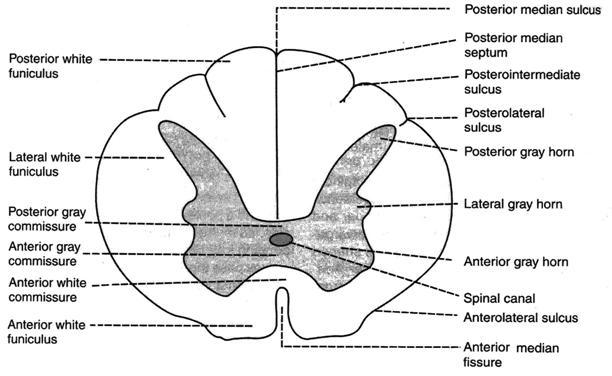 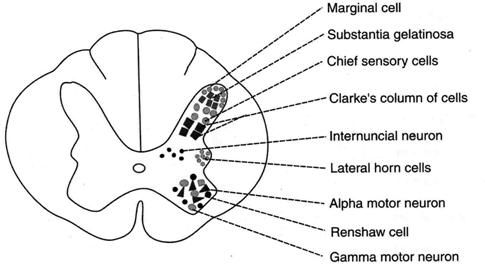 Three types of motorneurons are located in anterior gray horn.

Alpha motorneurons: Alpha motor neurons are large and multipolar cells. Axons of these neurons leave the spinal cord through the anterior root and end in groups of skeletal muscle fibers, i.e. extrafusal fibers.

Renshaw cells: These cells are also smaller cells. Renshaw cells are the inhibitory neurons playing an important role in synaptic inhibition at the spinal cord.

in thoracic and upper two lumbar segments, the gray matter forms a small projection in between the anterior and posterior horns. This is called the lateral gray horn. This has cluster of nerve cells called intermediolateral horn cells. These cells give rise to sympathetic preganglionic fibers, which leave the spinal cord through the anterior nerve root.

Substantia gelatinosa of Rolando: This is a cap like gelatinous material at the apex of posterior horn. This is formed by smaller nerve cells.

Chief sensory cells: The chief sensory neurons are situated in the remaining parts of posterior column.

Each half of the white matter is divided by the fibers of anterior and posterior nerve roots into three white columns or funiculi.

This lies between the anterior median fissure on one side and anterior nerve root and anterior gray horn on the other side.

Spinal animals – are animals with cutted spine on the boarder with medulla oblongata.

4. Disapperance of all forms of singleminded activity (alimentary, sexual, protective).

1. It carries the information about environment changings.

2. It participates in CNS co-ordinative activity by guiding the skeletal musculature: at switching-off the afferent impulsation from working organ its guiding becomes non-perfect.

The pyramidal tracts are concerned with voluntary motor activities and were the first tracts to be found in man (Fig. 20). 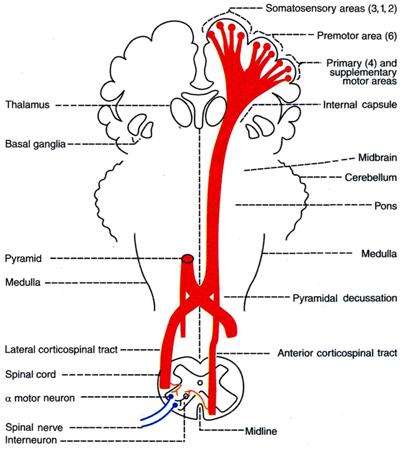 The fibers of pyramidal tracts are the axons of upper motor neurons.

Fibers of pyramidal tracts arise from the following nerve cells in the cerebral cortex.

1. Giant cells or Betz cells or pyramidal cells in precentral gyrus of the motor cortex. The giant cells are situated in area 4 (primary motor area) of frontal lobe of the cerebral cortex.

3. Other parts of frontal lobe.

4. Parietal lobe of cerebral cortex particularly from somatosensory areas (areas 3,1,2). It is believed that 30% of pyramidal fibers arise from primary motor area (area 4) and supplementary motor areas, another 30% from premotor area (area 6) and the remaining 40% of fibers arise from the parietal lobe particularly from somatosensory areas (areas 3,1,2). All the above fibers form the fibers of upper motor neurons of motor pathway.

After taking origin, the nerve fibers run downwards in a diffused manner through white matter of cerebral hemisphere and converge in the form of a fan like structure along with ascending fibers which project from thalamus to cerebral cortex. The fan like structure is called corona radiata. Then, the fibers descend down through internal capsule, midbrain and pons. While descending through pons, the fibers are divided into different bundles by the nuclei of pons. At the lower border of pons, the fibers are grouped once again into a compact bundle and then descend down into medulla oblongata.

This compact bundle of corticospinal fibers gives the appearance of a pyramid in the anterior surface of upper part of medulla. Because of this, the corticospinal tracts are called the pyramidal tracts.

At the lower border of medulla, the pyramidal tract on each side is divided into two bundles of unequal sizes. About 80% of fibers from each side cross to the opposite side. Thus, the fibers of both sides while crossing the midline form pyramidal decussation. After crossing and forming pyramidal decussation, the fibers descend through the posterior part of lateral white funiculus of the spinal cord. This bundle of crossed fibers is called the crossed pyramidal tract or lateral corticospinal tract or indirect corticospinal tract.

The remaining 20% of fibers do not cross to the opposite side but descend down through the anterior white funiculus of the spinal cord. This bundle of uncrossed fibers is called the uncrossed pyramidal tract or anterior corticospinal tract or direct corticospinal tract. This tract is well-marked in cervical region. Since, the fibers of this tract terminate in different segments of spinal cord, this tract usually gets thinner while descending through the successive segments of spinal cord. The fibers of this tract are absent mostly below the midle thoracic level. Before termination, majority of the fibers cross to the opposite side at different levels of spinal cord.

The lesion in the neurons of motor cortex and the fibers of pyramidal tracts is called the upper motor neuron lesion. The following are the symptoms:

2) Muscle tone. The muscle tone is increased leading to spasticity of muscles. The muscles are paralyzed. This type of paralysis of muscles is called the spastic paralysis. The spasticity is due to the failure of inhibitory impulses from cerebral cortex to reach the spinal cord.