Royal coat of arms of the United Kingdom

The names of the country

Lying off the north-west coast of Europe, there are two large islands and hundreds of much smaller ones. The largest island is called Great Britain. The other large one is called Ireland. In this geographical area there are two states. One of these governs most of the island of Ireland. This state is usually called The Republic of Ireland. It is also called “Eire” (its Irish language name). Informally, it is referred to as just ‘Ireland’ or ‘the Republic’. The other state has authority over the rest of the area (the whole of Great Britain, the north-eastern area of Ireland and most of the smaller islands). Its official name is The United Kingdom of Great Britain and Northern Ireland, but this is too long for practical purposes, so it is usually known by a shorter name. At the Eurovision Song Contest, at the United Nations and in the European parliament, for instance, it is referred to as ‘the United Kingdom’. In everyday speech, this is often shortened to the UK’ and in internet and email addresses it is ‘.uk’. In other contexts, it is referred to as ‘Great Britain’. This, for example, is the name you hear when a medal winner steps onto the rostrum at the Olympic Games. The abbreviation ‘GBP’ (Great Britain Pounds) in international bank drafts is another example of the use of this name. In writing and speaking that is not especially formal or informal, the name ‘Britain’ is used. The norm al everyday adjective, when talking about something to do with the UK, is ‘British’.

People often refer to Britain by another name. They call it ‘England’. But this is not correct, and its use can make some people angry. England is only one of ‘the four nations’ in this part of the world. The others are Scotland, Wales, and Ireland. Their political
unification was a gradual process that took several hundred years. It was completed in 1800 when the Irish parliament was joined with the parliament for England, Scotland, and Wales
in Westminster, so that the whole area became a single state – the United Kingdom of Great Britain and Ireland. However, in 1922, most of Ireland became a separate state. At one time, culture and lifestyle varied enormously across the four nations. The dominant culture of people in Ireland, Wales and Highland Scotland was Celtic; that of people in England and Lowland Scotland was Germanic. This difference was reflected in the languages they spoke. People in the Celtic areas spoke Celtic languages; people in the Germanic areas spoke Germanic dialects (including the one which has developed into modern English). The nations also tended to have different economic, social, and legal systems, and they were independent of each other.

The flag of England. The St George's Cross is a red cross on a white background. It is the national flag of England. It is believed to have been adopted for the uniform of English soldiers during the Crusades of the eleventh, twelfth and thirteenth centuries. From about 1277 it officially became the national flag of England. The flag of England (as opposed to the United Kingdom) remains St George's Cross, and continues to be used when showing allegiance to England alone. Nowadays this is primarily done at events such as international football and rugby union competitions. Saint George is the patron saint of England and various other countries and regions. The flag of St George is also the rank flag of an Admiral in the Royal Navy, and civilian craft are forbidden to fly it.

The flag of Wales. The national flag of Wales is The Red Dragon. It consists of a red dragon, passant, on a green and white field. The flag was granted official status in 1959, but the red dragon itself has been associated with Wales for centuries. The green and white stripes of the flag were additions by the House of Tudor, the Welsh dynasty that held the English throne from 1485 to 1603.

Name of the flag.The first use of the name 'Union' appears in 1625. There are various theories as to how it became known as the 'Union Jack', but most of the evidence points to the name being derived from the use of the word 'jack' as a diminutive. This word was in use before 1600 to describe a small flag flown from the small mast mounted on the bowsprit, and by 1627 it appears that a small version of the Union flag was commonly flown in this position. For some years it was called just 'the Jack', or 'Jack flag', or 'the King's Jack', but by 1674, while formally referred to as 'His Majesty's Jack', it was commonly called the Union Jack, and this was officially acknowledged.

Royal coat of arms of the United Kingdom 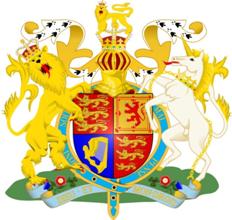 The Royal Coat of Arms of the United Kingdom is the official coat of arms of the British monarch, currently Queen Elizabeth II. These arms are used by the Queen in her official capacity as monarch, and are officially known as her Arms of Dominion.

Since 1837 the royal coat-of- arms has depicted a shield with the three English lions, the Scottish lions and the Irish harp, surrounded by the Ribbon of the Order of the Garter with its motto: "Evil be to him who evil thinks". The shield is supported by an English lion and the Scottish unicorn (The lion is a symbol of the Monarchy and at the same time it is a symbol of strength and power. The unicorn is a mythical creature, it symbolizes history and rich cultural heritage); standing on a field with the emblems of England, Scotland and Ireland, below this is the royal motto "God and my right".

God save our gracious Queen!

God save the Queen!

Long to reign over us,

God save the Queen.

The thistle is the national emblem of Scotland. There is a curious legend that in ancient times the Norsemen once landed somewhere on the east coast of Scotland with the intention of settling in the country. The Scots assembled to protect their land and took their station behind the river Tay. As they arrived late in the day, weary and tired after a long march, they pitched the camp and rested, not expecting the enemy before the next day. The Norsemen, however, were near. They crossed the river and wanted to take the Scots by surprise and slaughter them in their sleep. They took off their shoes so as to make the least noise possible. But one of the Norsemen stepped on a thistle and screamed. The alarm was given in the Scots' camp. And for the timely and unexpected help from the thistle, the Scots took it as their national emblem.

Welshmen all over the world celebrate St. David's day by wearing either leeks or daffodils. The link between the leek and St. David is the belief that he is supposed to have lived for several years on bread and wild leeks. The daffodil is also associated with St. David’s Day, due to the belief that it flowers on that day.

What the red rose is to Englishmen and the leek to the Welsh, the little shamrock is to the Irish. A popular notion is that when preaching the doctrine of the Trinity to the pagan Irish St. Patrick used the shamrock, a small white clover bearing three leaves on the stem as an illustration of the mystery.

John Bull is the name given to an imaginary typical Englishman, representing English people as a whole. He is usually shown in pictures as a fat man with a red face, wearing a top hat, a waistcoat and high boots. He also often has a bulldog, suggesting that he is like the dog in having a brave, fierce and independent character.

Identifying symbols of the four nations

1. Could you tell any names which were suggested in this chapter for the group of islands off the North-Western coast of Europe.

2. What historical and poetic names of the UK do you know?

3. What is the name of the national flag?

4. Describe the coat of arms. What symbols does the shield show? What do the animals symbolize?

5. Enumerate the plants which are the symbols of constituent countries (parts) of the UK. Explain their meaning.

6. Think of the well-known symbols and tokens of nationality in your country. Are they the same types of real-life objects (e.g. plants, clothes) that are used in Britain?

2. Quiz
Choose the correct answer.
1 What is the common internet domain address for
Britain?
A ,br
B .gb
C .uk
2 Which of these is not an acceptable short name for the United Kingdom of Great Britain and Northern Ireland?
A England
B Great Britain
C the United Kingdom
3 How many parts does the UK contain?
A 2
B 1
C 4
4 Which of the following figures is not associated with Britain?
A Britannia
B John Bull
C Uncle Sam
5 Which of the four nations’ flags is not incorporated in the flag of the UK?
A Ireland
B Scotland
C Wales
6 By what name is the UK flag often known?
A The Britannia
B Old Glory
C The Union Jack
7 O f which country is St. David the patron saint?
A England
B Scotland
C Wales

8 The shamrock is the national emblem of

A Great Britain and Irish republic

B Great Britain and Northern Ireland

10 The cross of St Andrew is

A the red diagonal cross

B the white diagonal cross

3. Match the word and definition.

Wales is largely ______________ with the highest peaks in the North and Central areas including Snowdon, its highest Summit.

The climate lies within the North ____________ Zone and has a changeable very timed climate.

6. Make up a PowerPoint presentations on the following topics:

7. Explain the meaning of the following countrystuding realia:

8. Give the summary of the chapter.