When the muscle is stimulated, electrical changes occur before onset of mechanical changes. Usually the electrical events in a muscle (or any living tissue) are measured by using a Cathode Ray Oscilloscope. Nowadays, sophisti cated electronic equipments like computerized polygraph are available to record and analyze the electrical activities of any tissue.

The potential difference between inside and outside of the cell under resting condition is known as resting membrane potential. 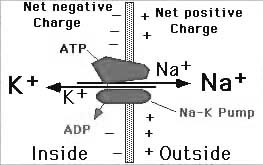 When the impulse reaches the muscle, the polarized condition (-90 mV) is altered, i.e. the resting membrane potential is abolished. The interior of the muscle becomes positive and outside becomes negative. This condition is called depolarization. With other words, depolarisation is membrane potentials difference decreasing.

Within a short time, the muscle obtains the resting membrane potential once again. Interior of the muscle becomes negative and outside becomes positive. So, the polarized state of the muscle is re-established. This process is called repolarization. So, it is potentials difference restoration.

The resting membrane potential is recorded as a straight baseline at -90 mV .

When a stimulus is applied, there is a slight irregular deflection of baseline for a very short period. This is called stimulus artifact.

The stimulus artifact is followed by a short period without any change. This period is called latent period, which is about 0.5 to 1 millisecond. 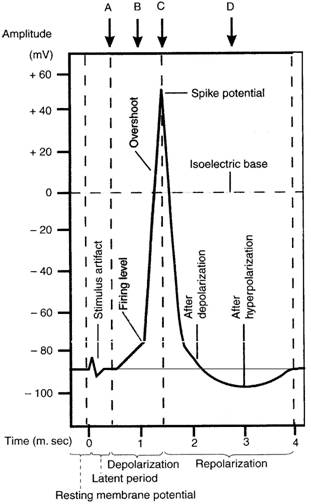 From firing level, the curve reaches the isoelectric potential (zero potential) rapidly and then overshoots the zero line up to +55 mV.

After Depolarization or Negative after Potential

The rapid fall in spike potential is followed by a slow repolarization process. This is called after-depolarization, trace depolarisation or negative after potential. The duration of this is 2 to 4 milliseconds.