5. Intelligent IT systems and autonomous machines as “electronic persons”

“Everything we love about civilization is a product of intelligence, so amplifying our human intelligence with artificial intelligence has the potential of helping civilization flourish like never before – as long as we manage to keep the technology beneficial.“

Max Tegmark, President of the Future of Life Institute 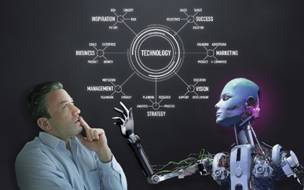 Read the text and translate it into Russian using the List of Recommended Vocabulary. Pay attention to the sentences with marked out words. Mind English grammar. Learn the underlined word combinations.

What was once in the realm of science fiction has become day-to-day reality. It might not be long before machines begin thinking for themselves – creatively, independently, and sometimes with better judgment than a human does. The research labs of some of the most advanced and best-known corporations are investing billions of dollars and many of their best scientific minds in pursuit of that goal. All that money and manpower has begun to pay off. People will find artificial intelligence (AI) routinely in their smart phones, cars, household appliances and it is on the verge of changing everything. Technology will pervade every work environment. Digitalisation impacts on jobs and skills at all levels, all sectors.

The event, organized by the University of Reading in 2014, was to assess whether a machine is capable of intelligent behavior indistinguishable from that of a human. Computer scientists, public figures and reporters gathered at the Royal Society in London to take part in the Turing test. Some of the participants were flesh and blood; others were silicon and binary. Thirty human judges sat down at computer terminals, and began chatting to determine whether they were talking to a computer program or a real person. The chatbot or computerized conversation programme with the personality of a 13-year-old Ukrainian boy named Eugene Goostman fooled 33 percent of the judges into thinking it was a human being.

In the past few years, AI has taken a big leap making important strides in areas like medicine, military technology, etc. The application areas of AI are extremely diverse, and include production robots in industry, drones and self-driving delivery robots in logistics and warehousing, healthcare robots and driverless vehicles. Systems based on AI include Search engines such as Brain Boost, Intelligent robots, such as ASIMO, QRIO, AIBO and ultra-realistic humanoid robots as female Robot Sophia (pictured). 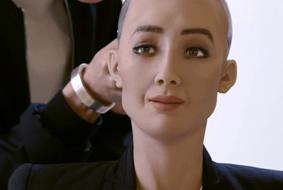 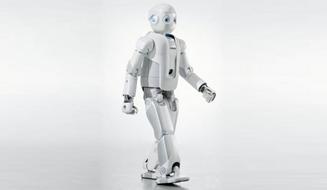 People often think of artificial intelligence as something akin to the being from the film "I, Robot" because Samsung's Roboray (pictured) can walk around without being spaced out and wandering off. Roboray walks in humans naturally manner by using “dynamic walking”. Therefore, this makes him better accepted by people and more energy-efficient. Roboray has stereo cameras (one in each eye), allowing him to build a mental map of its surroundings, and to “remember” where he has been before. That kind of autonomous robot navigation will also come in handy in places where there is no GPS signal. However, understanding how the brain works is one of the greatest scientific challenges of our time. Intelligence is thought of as a property or a quality of the human person, which can only be acquired and demonstrated through relationship with other intelligent beings. It is also seen in the ability to carry out certain tasks, and in the actions and functions, the human person performs. Any approach to developing computer programs with intelligent characteristics, known as AI, has been based on these understandings of intelligence.

AI is the field within computer science originated in Alan Turing's paper "Computing Machinery and Intelligence" in 1950. AI emulates, through mechanical or computational processes, some aspects of human intelligence including the ability to interact with the environment through sensory means and to make decisions in unforeseen circumstances without human intervention. Typical areas of research in AI include game playing, natural language understanding and synthesis, computer vision, problem solving, learning, robotics, speech recognition and machine translation. Narrow AI (or weak AI), is designed to perform a narrow task (only facial recognition or only internet searches or only driving a car). However, the long-term goal of many researchers is to create General AI (AGI or strong AI). While narrow AI may outperformhumans at playing chess or solving equations, AGI would outperform humans at nearly every cognitive task. 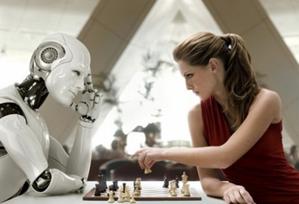 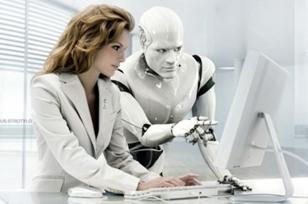 A general trend from the 1950s to the 1990s has been to depict intelligent computers in an increasingly anthropomorphic way. Early science fiction stories, such as Isaac Asimov's “I, Robot” (1950), explored the question of how one might distinguish between robots that looked human and actual human beings. Films and stories from the 1980s pick up this question, depicting machines with both mechanical and biological parts that are far less easily distinguished from human beings. While science fiction often portrays AI as robots with human-like characteristics, AI can encompass even autonomous weapons with goal-oriented behavior – to hit a target. Military robots such as drones and robotic kill-machines have already been used by CIA (Central Intelligence Agency) for many years, and are responsible for the death of their victims.

Historically two main approaches to AI included the classical and connectionist approaches. The first one is a mathematical approach based on symbolic reasoning in which ideas and concepts are represented by symbols (such as words, phrases or sentences), which are then processed according to the rules of logic. It is used in expert systems and other fields. The second approach is based on artificial neural networks that imitate the way neurons work, and genetic algorithms, which evolve better solutions to a problem with every generation. Neural nets are used in many areas, from computer games to DNA sequencing. However, both approaches have severe limitations. A human brain is neither a large inference system, nor a huge homogenous neural net, but rather a collection of specialized modules. Any attempt to interpret human behaviour as a system of computing mechanisms and our brain as a sort of computing apparatus is doomed to failure. The best way to mimic the way humans think appears to be specifically programming a computer to perform individual functions (speech recognition, reconstruction of 3D environments, many domain-specific functions) and then combining them together. The fact is that robots are nothing without the boundless potential that resides within the human brain; nothing but a computer doing fancy tricks that imitates us. 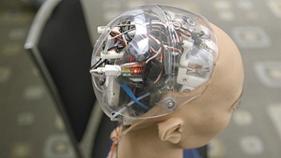 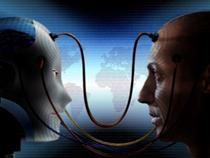 A group of French researchers, the INRIA Flowers team, has focused on a biologically inspired walking motion, the incredibly human-like, heel-toe motion that they hope will allow for better human-to-robot interaction. Poppy (pictured) is the latest humanoid robot created by a 3D printer. It has an articulated spine with five motors – almost unheard of in robots of this size. The spine not only allows Poppy to move more naturally, but helps to balance the robot by adjusting its posture. The added flexibility also helps when physically interacting with the robot, such as guiding it by its hands, which is currently required to help the robot walk. 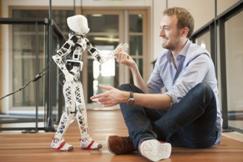 In the age of computers, things evolve exponentially. We have to consider what the next step of robotic evolution looks like. Robots could become a lot more 'sensitive' thanks to new artificial skins and sensor technologies developed by scientists. The new generation of humanoid robots will not only walk like a human, but will possess self-awareness, as well as a full range of high-tech analysis, capabilities and emotions. They will determine their own goals, exhibit emotional behavior and language skills so far have been exclusively human. The next generation of humanoid robots will become virtually indistinguishable from us.

According to robotics engineers, in the near future, the next step could be whatever the next generation robot chooses for itself. The robot that has a sense of self might lead to employment increases in manufacturing.

1. Can you imagine what the future would be like?

2. Artificial intelligence is something that people are talking about. What is it all about? What is AI?

3. What is a robot? What robots do you know (from films, cartoons)?

4. Would you give explanations why people want to have robots?

5. Automation of tasks using robots is eventually going to be a certainty, isn’t it?

6. If you had a home robot, what would you want it to do?

7. Imagine that robots appear in every family. What is the result?

8. Do you think that robots can make us lazier and fatter?