Language: This category is related to the language competence; that is to say, acquiring pronunciation, structures, and functions. This category is also closely related to cognitive processes like memorization, establishing relations and concentration, which emerged when students participated in the warm ups.

We found in the students journals that they thought they learnt different aspects of language according to the warm ups worked in class. For example, in the class where the memory game was applied, students said they had learnt vocabulary. Likewise, in the class where hangman was played, most of them said they had learnt to describe sensations and some others mentioned gains in spelling.

Graph 2 illustrates students' answers at one of the times when journals were collected and highlights the language aspects they could reinforce. 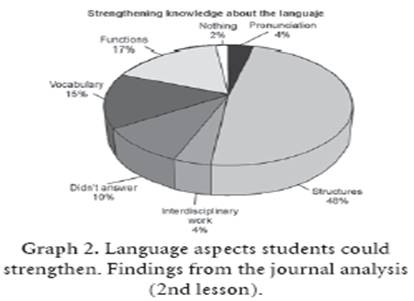 Another interesting aspect that students mentioned in the journals was the identification of language functions as a result of the learning process, as can be seen in the following examples:

Chiqui: I learned how food smell or taste.

Jordan: I learned to make recommendations related to a balanced diet

Daniel: I learned about how often my partners do some activities.

Pato: I learned about good and bad habits The aspect of paragraph construction and language structures learned was also evidenced in the data collected. This could be observed in statements like these: Jacky: I learned to write a short paragraph about my partner

Felipe: I learned to place the adverbs of frequency in a sentence

Sandra: I learned to write questions using 'How often…'

As can be noticed, functions and structures were learned easily as a result of the use of funny and enjoyable activities, combined with other important communicative aspects. That means the warm up let teachers link the way language can be used with its formal construction (structures). As mentioned by Howatt , it is not merely a question of activating and exciting but of stimulating the development of the language system itself.

2. Students' Involvement: This refers to the range of engagement that students had with the whole class. Here, two subcategories were drawn: participation and individual work.

Participation: This refers to continuous students' contributions to the class, by answering questions related to particular topics or situations. They took part in the activities, encouraged each other and took turns participating in problem-solving activities.

Individual work: This refers to learners' engagement with the activities in an individual way. Students got involved in writing, drawing, speaking, trying to memorize, and getting information and being focused on fulfilling the objective of the lessons.

Making reference to individual work and written production, a good number of students appeared to be interested in doing activities in their notebooks. Besides, it could be noticed that individual work later contributed to group work. After fulfilling the goals set out for individual tasks, when they worked as a group, students also contributed to task completion by looking for notes in their notebooks' or just giving suggestions.

We can illustrate students' involvement in individual work with the following examples taken from the field notes during the lesson on sensations and health habits when we applied hangman as the warm up.

The students worked in groups of 5 or 6. One of them directed the game based on the sentences given by the teacher in secret. Each captain took two pictures of objects to give clues to their parthers about the sentence they could gruess. (table3) 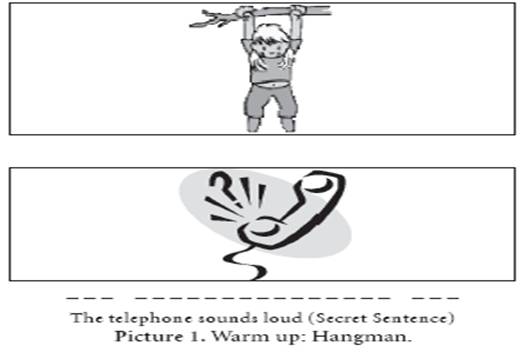 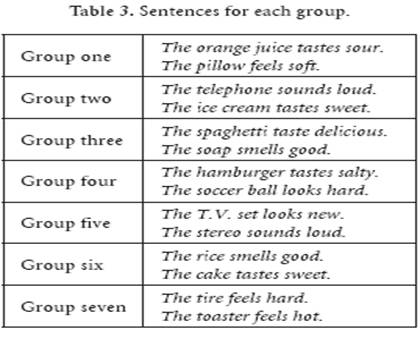 Each captain was also given the blanks in a piece of paper and the different parts of a human body (puzzles) for the game. Next we can witness some observations registered in a group:

Captain of the group: Nooo… o Yes?? (Checking with the blanks given to complete)

In another class, after the implementation of the warm up Ducks into the water, in the practice step, the students were organized in small groups and they had to classify all the habits from the board as good or bad ones as fast as possible. Then we could observe the following:

They looked very anxious to get the work finished. Students were writing the habits from the board and trying to identify them. Students asked a lot of questions in order to continue working in a right way

Ex: Teacher, "Are there the same number of bad and good habits?"

The groups seemed to participate actively because they were organized quickly and also they developed the activities in the time planned. During the whole activities a big average of students participated actively, gave the answers and solved the tasks carefully. They tried also to be the winners all the time. They were raising their hands, paying special interest to class.

Likewise, the analysis of the students' journals, which included some headings to encourage them to write, showed that warm up activities produce positive feelings such as happiness, motivation and excitement. It could be noticed in the analysis we made about these aspects for each warm up. For example, in the The Memory Game warm up (see Appendix 1), students expressed that they felt as follows: (table4) 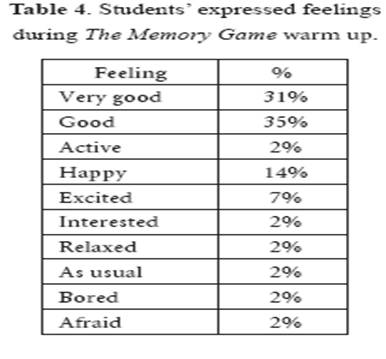 3. Class Interaction: This category is related to how the students tried to get information as well as how they shared knowledge or information. The students showed they interacted in order to get actively involved in the warm up activities. Some examples of this category are shown in the following extract from field-notes (in lesson 2) while students were working on daily activities and routines.

Students try to get information asking to their partners and using simple expressions in English or in Spanish. Also, they asked the teachers: Is this a good Habit?

T: You say: How often do you play tennis? Javier: How can I make the question' Please repeat me.

They correct each other.

Some students also interacted with the teacher asking for a chance or criticizing her about organization or presentation of the materials. This shows a clear interest in the class, as can be seen in the following examples taken from lesson 4:

T: Bad habits to the center!!

Jordan: Profe, me da la revancha? (Teacher, can you give me another chance?)

During the implementation stage, we also observed that students continuously asked the teacher questions. The students wanted to be explained exactly what to do. During the class where the activity Ducks into the water was used, students were asked to classify the good and bad habits that were stuck up on the board. Some students from each group walked to the board trying to look at it carefully and went back to their groups to help their peers complete the activity. Likewise, students' attitude was remarkable during this time; it was always positive; they tried to answer the questions asked by the teacher in the different class stages. Several students went to the center and a student helped to check who was right or wrong. On the whole, students seemed to actually enjoy the classes because the general vision was a class drawing, writing, talking or listening carefully whenever the class activities required doing so.

4. Values' Reinforcement: Values are understood as one's principles, priorities, or standards. We refer here to how the warm up promoted the reinforcement of human values like honesty, self-confidence and responsibility. During the development of the classes, students encouraged each other. Also, when they participated in the activities they respected their turns and seemed to be engaged in the activities proposed. For instance, when they took part in the hangman contest, we gathered the following comments:

Briggitte: Teacher, you have noticed that I am participating so much…

Lina: But not only Briggitte… Also Jordan, who misbehaved all the time, is working well.

When two groups got the same score, Leidy said: Teacher, they were the best because they used the right expressions from the beginning without help.

If we examine the connection between values and the previous excerpts, we can infer that self-esteem is noticed in Briggitte's statement. Likewise, Lina evidences how students encouraged each other. In addition, Leidy shows that students recognized the efforts made by others.