For the purpose of our project, we considered some specific aspects related to warm up activities which we thought could make students' learning more stimulating. They were as follows:

- Breaking the monotony of learning: About this one, Dornyei (2001) highlights the importance of the "motivational flow" when talking about the general rhythm and sequence of events in class and suggests starting it with a warmer, which can be a short stimulating game to set the tone.

- Making the tasks more interesting: The author claims that humans are able to produce concentrated effort if they want to. Generating this interest involves a set of characteristics. Most of them can be adaptable; thus, they become challenging for students since they have interesting content, novelty, and intriguing, exotic, fantasy and personal elements; they stimulate competition and humor.

- Increasing the involvement of the students: He considers that it is important to make students active participants and suggests selecting tasks which require mental or bodily involvement of each participant and creating specific rules and personalized assignments for everybody.

Diagram 1 shows some of the principles that a teacher must consider when preparing a warm up activity. It emerged as a result of our reflections upon our conceptual framework and the implementation process we designed. 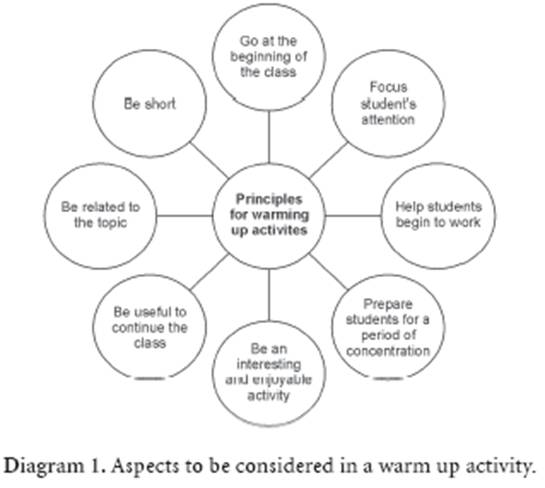 The principles contained in this diagram make us realize that warm up activities are not only processes to begin the class, but tools that help us catch students' attention. If you start with an exciting and interesting activity you can be sure the other steps can be developed easily. This warm up must also be short because it is like a preparation for the other class stages. That is why it has to be related with the topic and centered in communicative aspects which could involve activities that emphasize the practice of different skills.

In addition, a warm up must be prepared taking into account the students' learning styles. According to Cárdenas (2001), "students learn best when they can address knowledge in ways that they trust. They will learn best through doing, rather than reflecting" (p. 18). Additionally, Winters (as cited in Cárdenas, 2001) suggested that incorporating the "play" element adds meaning to the issue of applying learning styles.

Learning English highly depends on pupils' positive attitude toward the class. Consequently, learning must be stimulating and enjoyable through breaking what might cause monotony in this process and strengthening what makes tasks more interesting, as well as what increases students' involvement. The use of warming up activities implies features as the ones previously described in order to get students' attention, to make them interested in what is going on, to focus on language items and to increase learners' expectations by consciously arranging the conditions in a way that they put the learner in a more positive or optimistic mood.

As has already been said, this research was developed with 68 students who belonged to two groups of 7th grade. Thirty-five belonged to the advanced level and the others to the intermediate. They were between 12 and 15 years old and did not participate a lot in class. Most of them seemed bored or not interested in the activities.

The study was carried out simultaneously by the two teachers participating in it, taking turns for implementing the project in the corresponding groups and observing each other's class, so that each researcher acted as a teacher and as an observer. At the end of each lesson we implemented, students were asked to fill in a journal, which was then analyzed with the field notes taken by the observer. Teachers had the possibility to work together because they only taught English and their professional experience had been in this subject for no fewer than 10 years.

We decided to work based on action research because it is contextual, evaluative and reflective and it aims to bring about change and improvement in practice. We decided to follow Kemmis & McTaggart's Diagram 1. Aspects to be considered in a warm up activity. model (as cited in Nunan, 1989), which considers four main aspects as follows:

- To develop a plan of action to improve what is already happening.

To do so, we designed a chronogram including the necessary aspects to be worked: The pedagogical strategy and the necessary tools to explore what happened during such implementation.

- To act to implement the plan. In this step, we not only designed the lesson plans, including warming up activities, but also developed them with the chosen groups.

- To observe the effects of action in the context in which it occurs. This was done by means of class observation, field notes and journals.

- To reflect on the effects of the use of warm ups as a basis for further planning and subsequent action, through a succession of cycles. To do so, after each class we gathered information to analyze what we had observed in relation to the effects of the warm up and shaped our plan for the next one.

The research involved reflection based on our experiences and on the literature. We reflected about what was happening in class, why this happened in that way, how we could take advantage of some activities that caused students to be motivated. This implied collaborative work between a pair of teachers. Teachers found out what was going on in the classroom practice in order to make changes and produce actions. It meant to try to increase motivation and the students' involvement during the class, so that they could have more tools to improve their language learning process. All of these efforts allowed teacher-researchers to have new available activities useful to be applied in the daily work as the ones included in the lesson plans (see a sample inAppendix 1). It should be clarified that we took into account the ideas suggested by the students in the diagnostic questionnaire that we applied at the beginning of our project.

The results can be seen in Table 1.Appendix 1 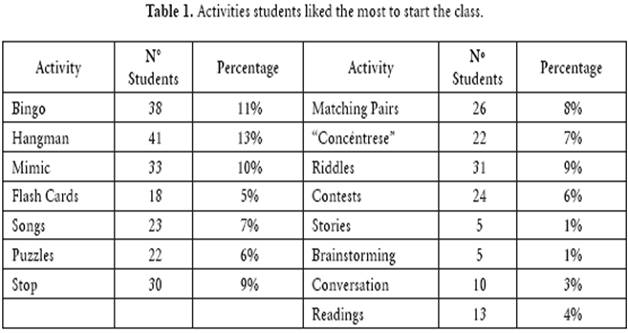 We also asked students about the activities that encouraged them to work in class and the ones they liked the most to start it. The results were as follows: (graph1) 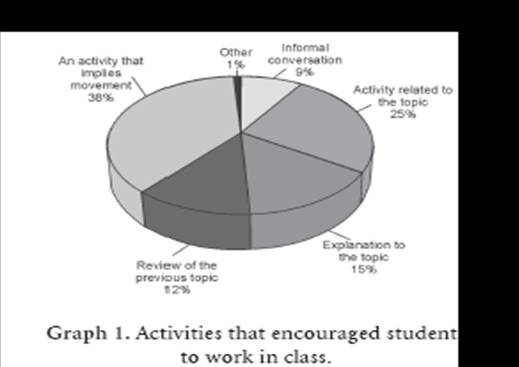 Based on the information gathered in the diagnostic stage, we created six lesson plans for the implementation stage. These plans were developed during the last three months of 2004. They were organized according to the aspects we considered important for our research (see sample provided in Appendix 1). Similar to this example, we implemented some warm ups connected to the topic of the lessons (see Table 2).

Data Collection Instruments The first instrument designed was a questionnaire. As we already explained, it was elaborated in order to identify some aspects related to the students' point of view about the class stages, the activities they liked the most, and the ones that helped them to become involved during the class process.

According to this preliminary stage, we found that most of the students had more interest in activities that implied movement or those like hangman, bingo, mimics, or guessing, to start the class. In addition, they apparently preferred working in small groups. Also, they suggested games or dynamics, and varied activities to have a good start in the lesson. It seemed that these activities could encourage them to understand better, increase their attention and interest and promote interaction among classmates.

Students appeared to have interest in activities that motivated, caught their attention and increased their understanding. Those findings were very relevant when preparing the warm up as it could be noticed in the lesson plan sample included in Appendix 1. Each one of the lesson plans was designed according to the stages described before and taking special care of the warming ups selection process. Based on the results of the questionnaire, we continued the process of data collection as described in the next lines.

They were filled in and analyzed class by class. We programed 6 lesson plans and also collected an average of 60 journals per class. At the end of each session, students were asked to fill in his/her journal which included some headings that encouraged them to write (see Appendix 2). They were motivated to do that because it did not imply a score or grade and also because we explained that they had the possibility of helping the teacher to improve the class and to control their own learning process.

They were taken by one of the teacherresearchers, the one who observed, and they allowed us to identify and reflect on the findings. As well as with the journals, field notes were written during the process of each class.

We based our observation on suggestions given by Nunan , who recommends organizing the findings in categories as they are analyzed. The collection and later analysis of the gathered information led us to identify key aspects in relation to the role of warm up activities in students' involvement in the English class. We organized information into four main categories: strengthening knowledge about language, students' involvement, interaction, and values (see Diagram 2). 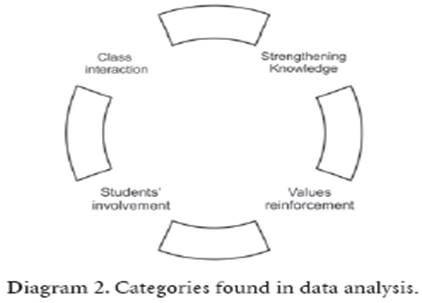