As remembered by brothers and sisters who were there.

Five short years, 1936-1941, had seen the rapid growth of the Cotswold Bruderhof in England. After the outbreak of World War II, local hostility towards the community with its many German members led to the emigration of 350 adults and children to Paraguay. Only three of the brotherhood, Stanley Fletcher, Charles Headland, and his wife Hella remained behind to complete the sale of the property. They lived in the printing house of the former Bruderhof, intending to leave for Paraguay as soon as the transaction was completed…

Stanley Fletcher: The last group left for South America and on that very day the first person came with the serious intention of joining us; three days later, Dick Whitty, a Scotsman, arrived. One after another people came, including some we had never heard from before. We had no permission to take them to Paraguay with us, so we knew we were running into a big problem.

Peter Rutherford: I cycled onto the former Bruderhof at the end of July 1941. I had rejected my middle class and Anglican upbringing. I was utterly selfish and agnostic, but war involved a young man in daily decision. The Battle of Britain was on, and death by violence out of the skies was commonplace. What I found alive in the little group went to my heart and gave new hope. The spirit that was conveyed through them presented me with a clear challenge to repent and go the way of faith in Jesus.

The sale of the property was delayed due to war conditions, and the British government would not allow any of these now twenty new people to leave the country.

The Bruderhofs in Paraguay urgently requested all who had permits to travel at the next opportunity, leaving the sale in the hands of solicitors. The brotherhood of three asked the novices (who had already committed themselves to the community), “What will you do when we go?” They said they would stay together whatever happened and start anew, somewhere, somehow.

Stanley: A cable was sent to the brotherhood in Paraguay explaining the situation and the reply came, just after Christmas 1941, “Stay in England and look for a new place.” There was great rejoicing.

Many trips were made to look for a new place, and finally the group found Lower Bromdon Farm in Shropshire, which was to become the Wheathill Bruderhof.

Charles Headland: In March 1942 we all moved up there. It was actually very simple how we lived. We had crates and boxes to sit on, and wooden boxes for tables, but were we happy! I tell you there was nothing we wouldn’t have endured for the joy of being together.

Barbara Greenyer: The War Agricultural Committee inspected every farm, and those farmers who were not producing their quota were required to sell out. Wheathill was very rundown and classed as “C”. We had to raise it to “B” within a year or risk having to leave.

Dick Whitty: To build up a farming Bruderhof from scratch in the middle of a war, with no farmers among us, was a task that could frighten us, or, as Stanley and Charles put it, one we could only tackle in faith.

Barbara: We had no tractor, no seed drill, nothing. The seeding of the grain was done by hand in the ancient fashion, broadcasting it onto the furrows.

In working together closely we rubbed up against each other’s natures and shortcomings. We had to spend quite a bit of time sorting things out. It was very important to us not to let the sun go down leaving us disunited.

Olive Rutherford: On one occasion we were called out of bed in order to get something clear. The enthusiasm and first love were very real.

Barbara: Kenneth and I arrived on the Saturday of Easter weekend. It had been our wish to be there for Easter. Then we heard there were some difficulties and the group felt unable to celebrate Easter until all were united. That made a deep impression on us both. When we finally celebrated Easter we were very joyful and understood its meaning in a new way.

Olive: Stanley read mostly from Eberhard Arnold’s writings at the meetings. I believe it was this clear call from Eberhard Arnold to the way of Jesus and the atmosphere of the brotherhood which spoke to my heart. So many who came decided very quickly and simply to dedicate their lives. There was a strong feeling of belonging together and solidarity amongst us.

Barbara: It was after the shaking accident to our sister Muriel [Marsh], fatally burned by fire, that Kenneth and I asked to become novices and were accepted a few days later. At that time we still did not know what the future of the farm would be. We were committing our lives regardless. So the words, “for now we have house and shelter, but we do not know what today or tomorrow will bring,” were very living for us all.

Thomas Jefferies: I knew I must be a part of what was being lived there, and I was ready there and then to make a life commitment. In Wheathill there was no electricity, no phone, no gas, no'running water, but what I experienced in my encounter was so consistent with what was contained in the Gospel that I knew I would be a complete hypocrite if I turned my back on it.

Audrey Ann Jefferies: I was struck by the childlike joy and enthusiasm; this is what stands out, not the difficulties we faced.

Barbara: The brotherhood in Paraguay supported us by sending Sydney and Marjorie Hindley back to England. With their coming, our first dining room in the farmhouse became too small and we moved into a long wooden hut perched on the hill. It reminded Franzi Whitty, who had come from Vienna, of the Ark, with the tiny circle gathered there in the middle of an alien world.

In the next weeks of November and into December, we prepared for our first baptism. On December 17, 1942 eleven were baptized.

On Christmas Eve Jack Marsden came to us. Arriving shortly before midnight, he found the community at the supper table singing “Dona nobis pacem.”

moors singing Christmas carols to our neighbors, who proved both friendly and helpful, especially in teaching us newcomers how to farm. Oh one of these expeditions we climbed the Brown Burf mountain.

Eileen Robertshaw: A snow storm overtook us and as we crouched low under the firs for shelter, Sydney told how the early Hutterites had to flee from place to place and hide by rock, mountain and wood. We thought of what many had had to endure for their faith and what we might have to face.

Barbara: The difficulties that later confronted us proved very different. In the New Year others returned from Paraguay to help us. We rejoiced; we were very conscious of our inadequacy. We looked to these brothers and sisters for leading, but in so doing neglected the leading of the Spirit which we had experienced so clearly in the beginning. Coldness of heart began to creep in, and led to many crises in the following years. In spite of this, people still came and gave their lives. It was only after many years, through struggles and times of personal repentance, that it was possible to experience again the first love which had characterized the beginning in Wheathill. The wonder is that God still held his hand over us and did not let us go. 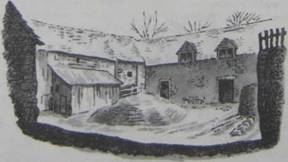