III. Tell your partner about these famous papyri.

1. A (Book closed): Tell about the Rhind papyrus.

2. B (Book closed): Tell about the Moscow papyrus.

IV. Find some information about Mathematics of ancient civilizations and share it with other students (e.g. the Maya calendar, the ancient numeration systems).

THE HISTORY OF THE SYMBOLS FOR PLUS AND MINUS 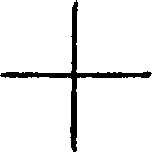 The symbols of elementary arithmetic are considered to be algebraic, most of them being transferred to the numerical field only in the 19th century. When we study the genesis and development of the algebraic symbols of operation, therefore, we include the study of the symbols in arithmetic. Some idea of the status of the latter in this respect may be obtained by looking at almost any of the textbooks of the 17th and 18th centuries. Hodder in 1672 wrote ‘note that a + (plus) sign signify Addition, and two lines thus = Equality, or Equation, but a X sign thus, Multiplication,’ no other symbols being used. His work was the first English arithmetic to be reprinted in the American colonies in Boston in 1710. Even Recorde (c1510–1558), who invented the modern sign of equality, did not use it in his arithmetic, the Ground of Arts (c1542), but he used it in his algebra only in 1557.

The earliest symbols of operation that have come down to us are Egyptian. In the Ahmes Papyrus (c1550 B.C.) addition and subtraction are indicated by these symbols on the left and right above respectively.

The Hindus at one time used a cross placed beside a number to indicate a negative quantity, as in the Bakhshali manuscriptof possibly the 10 th century. With this exception it was not until the 12 th century that they made use of the symbols of operation. In the manuscripts of Bhaskara (c1150) a small circle or dot is placed above a subtrahend as illustrated for – 6, or the subtrahend is enclosed in a circle to indicate 6 less than zero.

In Europe the word plus, used in connection with addition and with the Rule of False Position was not known before the latter part of the 15 th century.

The use of the word minus as indicating an operation occurred much earlier, in the works of Fibonacci (c1175–1250) in1202. The bar above the letter simply indicated an omission. In the 15 th century, this third symbol was also often

used for minus, but most writers preferred the other variations.

In the 16th century the Latin races generally followed the Italian school, using the letters p and m, each with the bar above it, or their equivalents, for plus and minus. However, the German school preferred these symbols, neither of which is found for this purpose before the 15th century. In a manuscript of 1456, written in Germany, the word ‘et’ is used for addition and is generally written so that it closely resembles the modern symbol for addition. There seems little doubt that the sign is merely a ligature for ‘et’, much in the same way that we have the ligature ‘&’ for the word ‘and’.

I. Match the words (1–7) with their definitions/explanations (a–g):

II. Read the article again. Say what events the following years refer to:

1. The earliest symbols for plus and minus that have come down to us are Egyptian.

2. The Hindus were likely to represent a negative quantity by a dash placed above the number in the 10th century.

3. The first symbols for plus and minus found in Egyptian writing looked like a pair of legs.

4. In Europe the word minus in connection with subtraction was used earlier than the word plus to indicate addition.

5. The bar above the letter was the only written form for minus used by most writers in Europe.